Getting To the Starting Point: LAX-Biarritz-St. Jean Pied de Port

We left LAX at 1:15 p.m. Friday, Aug. 12, arrived Paris at 9:30 a.m. and then connected to a flight to Biarritz. We got to Biarritz hotel around 4 p.m. Saturday and pinkie swore that we would not go to bed until dark.

We had time to kill until our 2 p.m. transfer by car to St. Jean Pied de Port, so we took off walking in the other direction from the day before, headed for the lighthouse.

We could have walked to the top of the lighthouse, but a) it was an hour’s wait, and b) the next day we would be climbing 3,000 feet into (and over?) the Pyrenees. Or, for perspective, like climbing that lighthouse 20 times.

Right on time! Awesome. He hoists our two suitcases into the trunk, jumps back in and says cheerfully, “To the beach! Yes?”

”The Port?” He clarified as he pulled away.

“No, we are going to St. Jean Pied de Port. To walk the Camino.”

”OK, St. Jean Pied de Port.” He enters something into his phone and Donna and I realize we have the wrong cab.

I don’t speak French, but I could tell that the words he spoke were probably not in the Duolingo curriculum.

As he made an illegal u-turn and double parked outside our hotel lobby, we saw a very confused looking couple talking to man with van. They were obviously packed for a day on the beach.

Our driver was sweet and friendly. Thankfully, he spoke Spanish, which seemed so familiar to me. It was a one-hour drive to St. Jean, and the scenery was stunning. Winding roads through tall mountains spotted with farms.

We’ll cross this river in the morning and the adventure begins! We walked around all afternoon hunting for the beginning of the Camino. 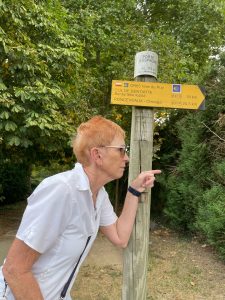 Found it! And then we reorganized every thing into what goes in our day packs (rain gear, first aid kit, Pilgrim’s Passport and 2 liters of water). 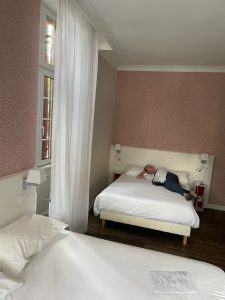 And we had two full-sized beds in this room on which to spread it all out.

We are ready. Buen Camino!

9 responses to “Getting To the Starting Point: LAX-Biarritz-St. Jean Pied de Port”